A unique man with a unique vision

Lamping Elementary is named in honor of Frank Lamping who is perhaps best known for helping to establish the middle school concept in the Clark County School District. Mr. Lamping gave Clark County 30 years of dedicated service prior to his retirement. 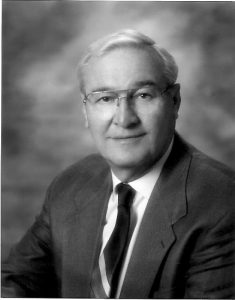 Frank Lamping, a first-generation American, was the youngest of seven children. He was married for over 40 years to the late Betty Lee Kirk, a Pittsburgh native. Frank Lamping has two sons, Kirk and Clark.

Mr. Lamping began his education career in Pittsburgh, first as a student at St. Ambrose Catholic Elementary School and then at North Catholic High School. After serving in the military for three years during the Korean Conflict, he attended Slippery Rock State Teachers’ College where he received his undergraduate degree and then master’s degree from the University of Pittsburgh.

Mr. Lamping taught in the Pittsburgh Public County School District for several years before moving to Las Vegas in 1963. Mr. Lamping was honored with the privilege of opening two new schools, Kenny C. Guinn and Thurman White. Kenny C. Guinn Junior High School, which he opened in 1978, was the first school in Nevada to receive the President’s Excellence in Education Award.

Frank Lamping has received many awards recognizing his contributions as an educator.

The staff, students, parents and community of Lamping Elementary School are committed to excellence in education. It is our mission to provide a caring, positive and safe learning environment where each child is challenged to achieve commensurate with his/her ability and is provided enriching experiences that foster personal integrity, respect and responsibility.