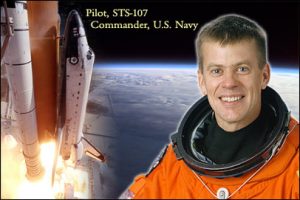 We at the Lamping are very lucky to have the support of Barry and Audry McCool, parents of William McCool.  We greatly appreciate their willingness to share their very special son with our community  They have made a wonderful and personal contribution to our school.

PERSONAL DATA: Born September 23, 1961 in San Diego, California. Died on February 1, 2003 over the southern United States when Space Shuttle Columbia and her crew perished during entry, 16 minutes prior to scheduled landing. He is survived by his wife and children. He enjoyed running, mountain biking, back country hiking/camping, swimming, playing guitar, chess.

EXPERIENCE: McCool completed flight training in August 1986 and was assigned to Tactical Electronic Warfare Squadron 129 at Whidbey Island, Washington, for initial EA-6B Prowler training. His first operational tour was with Tactical Electronic Warfare Squadron 133, where he made two deployments aboard USS CORAL SEA (CV-43) to the Mediterranean Sea, and received designation as a wing qualified landing signal officer (LSO). In November 1989, he was selected for the Naval Postgraduate School/Test Pilot School (TPS) Cooperative Education Program. After graduating from TPS in June 1992, he worked as TA-4J and EA-6B test pilot in Flight Systems Department of Strike Aircraft Test Directorate at Patuxent River, Maryland. He was responsible for the management and conduct of a wide variety of projects, ranging from airframe fatigue life studies to numerous avionics upgrades. His primary efforts, however, were dedicated to flight test of the Advanced Capability (ADVCAP) EA-6B. Following his Patuxent River tour, McCool returned to Whidbey Island, and was assigned to Tactical Electronic Warfare Squadron 132 aboard USS ENTERPRISE (CVN-65). He served as Administrative and Operations Officer with the squadron through their work-up cycle, receiving notice of NASA selection while embarked on ENTERPRISE for her final pre-deployment at-sea period.

McCool accumulated over 2,800 hours flight experience in 24 aircraft and over 400 carrier arrestments.

NASA EXPERIENCE: Selected by NASA in April 1996, McCool reported to the Johnson Space Center in August 1996. He completed two years of training and evaluation, and was qualified for flight assignment as a pilot. Initially assigned to the Computer Support Branch, McCool also served as Technical Assistant to the Director of Flight Crew Operations, and worked Shuttle cockpit upgrade issues for the Astronaut Office. He was the pilot on STS-107, logging 15 days, 22 hours and 20 minutes in space.

The staff, students, parents and community of Lamping Elementary School are committed to excellence in education. It is our mission to provide a caring, positive and safe learning environment where each child is challenged to achieve commensurate with his/her ability and is provided enriching experiences that foster personal integrity, respect and responsibility.